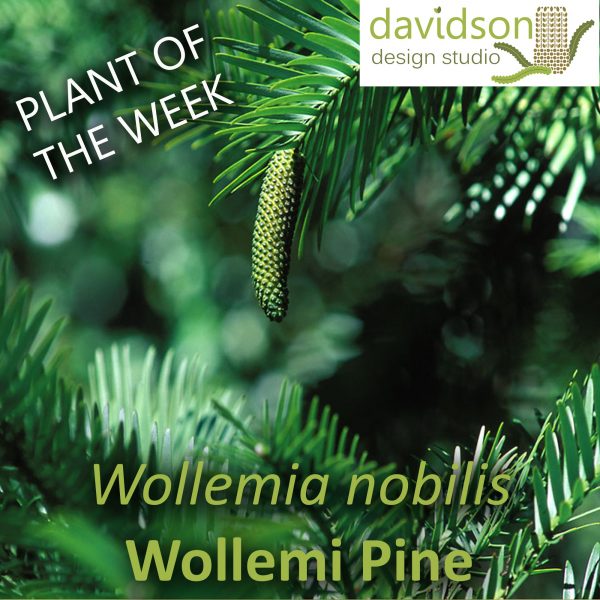 Plant of the Week – Wollemia nobilis

Discovered in temperate rainforest in an NSW national park in 1994, Wollemia nobilis (Wollemi Pine) was previously only known through fossil records and presumed extinct.

In September 1994, David Noble, Michael Casteleyn and Tony Zimmerman were exploring the Wollemi National Park when David took samples of an unusual conifer the three found in a steep-sided sandstone gorge for identification.  National Parks then went under a veil of secrecy with the three explorers not understanding the magnitude of their discovery for some six months.

Classified as critically endangered and legally protected in Australia, the location of the stand of ancient Wollemi pines is secret with Recovery Plans having been drawn up for the management of the fragile population.  Ironically, National Parks, while collecting cones from the stand via helicopter, inadvertently pruned one of the pines with it a rotor.

The Wollemi pine is an evergreen tree capable of growing to 40 metres.  The bark is dark brown and knobbly and bright green leaves are flat, 4-8 cm long and 2-4mm wide.  The characteristic conifer like seed cones are green, 12 cm long and occur on the end of a leaf branch.  The cones mature 18-20 months after wind pollination when they disburse and release thin, papery seeds with a wing around the edge to aid in wind-dispersal.  Seedlings are slow growing and mature trees are long lived with some of the secret individuals found thought to be between 500 and 1,000 years old.  In 2006, a propagation programme made Wollemi pine specimens available to botanic gardens around the world, and then in 2007, to the general public.

We highly recommend planting the Wollemi pine in a large pot or planter.  Varying growth rates and heights have been reported in the past 12 years. Before the relict population was discovered in Wollemi National Park, the most recent known fossils date from approximately 2 million years ago.

The Wollemia nobilis is described as a Lazarus taxon or a living fossil.